This time last year I remember feeling distinctly underwhelmed by my written output in 2017, and wanted to step up my game in 2018.

I have no such misgivings about my written output in 2018, and probably wrote more fiction last year than I have at any time in the last 15 years – which I’m very happy with.

New material aside, I also managed to finish a handful of long-abandoned projects – by hacking them up for parts and stitching them together in grisly new combinations, which was similarly satisfying. In some cases, decades-old antagonists were lifted out of botched books and given a new lease of life in alternative narratives.

My first two books (not written in 2018 admittedly), Meat Bubbles & Other Stories (Close To The Bone) and Repetition Kills You (All Due Respect) were released in June and September, respectively.

I also self-published a trio of e-book novelettes, Snuff Racket (also included in Meat Bubbles), Slug Bait and Spine Farm, all of which complement and expand the Paignton Noir universe explored in the books. Spine Farm is a direct sequel to Snuff Racket/Meat Bubbles, and paves the way for the events depicted in the upcoming Boneyard Dogs.

Slug Bait is part of a different (post-Repetition Kills You) timeline, and a number of supporting characters will also appear in future books. Of the three novelettes, this one sold the best, so something about the story must have piqued people’s interest. Either way, this narrative isn’t dead and buried – unlike half of the characters!

The novelettes are great fun to write – and have probably replaced my enduring obsession with flash fiction – although I still managed to notch up a handful of short stories across the course of the year:

Looking ahead, I have at least two books coming out in 2019 (watch this space for more details), and I would like to find a home for a couple of extra novellas too – which is easier said than done! 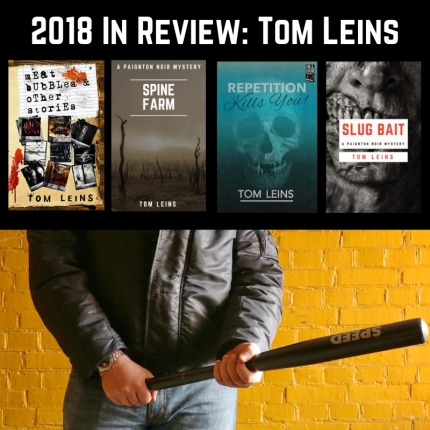 Tom Leins is the author of the Paignton Noir mysteries SKULL MEAT, SNUFF RACKET, SPINE FARM, SIN CLINIC, SLUG BAIT, SLOP SHOP and BONEYARD DOGS and the short story collections MEAT BUBBLES & OTHER STORIES (Close To The Bone), REPETITION KILLS YOU (All Due Respect), TEN PINTS OF BLOOD (Close To The Bone) and THE GOOD BOOK: FAIRY TALES FOR HARD MEN (All Due Respect).
View all posts by Tom Leins

This site uses Akismet to reduce spam. Learn how your comment data is processed.